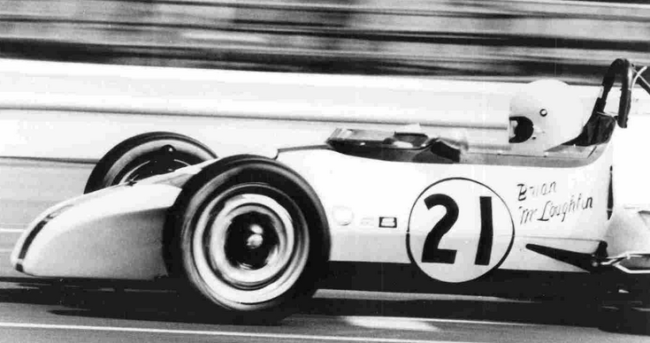 Brian McLoughlin was a prominent Vancouver lawyer who took up car racing at age 43, suffering two crushed discs and a broken leg in separate crashes, yet still managing to win an open-wheeled regional championship.

In 1971, he attended a high-performance driving school under racer Bob Bondurant at Ontario, Calif., where another pupil was the actor Paul Newman, later a well-known Indy-car team owner. The two tyro drivers nearly crashed when both entered a slick corner in Porsche 914s.

McLoughlin began racing Formula Fords, winning a regional title in Edmonton in 1972. He advanced to Formula Vs, enjoying a second-place finish in a race at Westwood, his home track, in suburban Coquitlam, B.C.

Educated at the private St. Michael’s School and the public Oak Bay High, before entering Victoria College. He enrolled in law at the University of British Columbia and was called to the Bar in 1950. He was named a Queen’s Counsel in 1971 and in 1984 became Treasurer of the Law Society of British Columbia. He was dubbed Bulldog McLoughlin for his tenacious litigation.

He developed a hazelnut farm with his wife on a four-hectare (11 acres) seaside property at Merville, north of Courtenay, on Vancouver Island. This property, known as McLoughlin Gardens, will become a wilderness park under the management of the Comox Valley Regional District. As recounted in 1984 in The Advocate, a magazine published by the Law Society of B.C., McLoughlin did not have a telephone at his rural retreat, the nearest one being at a gas station on the highway. When colleagues tried to reach him, they were politely informed he was unavailable as he was at the “nut farm.”

Brian McLoughlin (No. 21 in blue) leads drivers into a corner at Westwood Motorsport Park in Coquitlam, B.C.